No Calendar Events Found or Calendar not set to Public.
Blog

I am this year off with bang so far two weeks in and my planner is up to date and I am already scrappin' events as they happen!  WHOA! 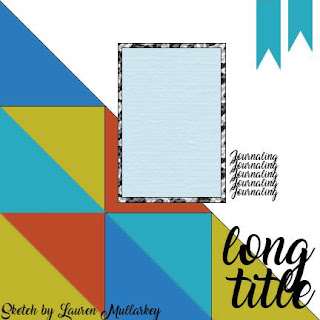 I kept this layout as simple as I could so that I could focus on the pictures and story.  If this layout looks scary to tackle, let me help you.  Pick 4 pattern papers and cut them into 4x4 boxes.  Then cut the boxes in half diagonally.  **HINT:  don't use paper that has / needs direction.  Stick to simple patterns where you can turn the image and it won't effect the pattern!

I used the Simple Stories New Year kit for 2019.  Once I decided to tear the countdown off the edge (because I didn't want the whole background to be the whiteish paper) I realized I would have to change the sketch and flip it the other direction.  So I shrunk the obvious 4x4 boxes into 3x3 boxes leaving space for my edge.

I cut my boxes just a smidge smaller than 3x3 so I could have a border around them and used that lovely holographic paper behind the triangles.

I then placed my photos on gold shiny foil paper for a matting and voila.  I added the 2019 with MAMBI glitter letters and numbers and then kept it as simple as possible by adding in some jeweled stars and shiny enamel stickers. 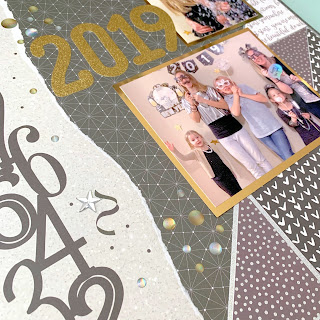 And that my friends is my 2019 New Year layout!  I hope you play along with us on the DT and post your layout to the Stick it Down blog for a chance to win some prizes from our sponsor Cheeky Studio.

Happy New Year, this is going to be a fabulous year!

More in this category: « December Sketch: Wreath Layout Now and Then: A decade of Love »

Make sure you enter all the required information, indicated by an asterisk (*). HTML code is not allowed.